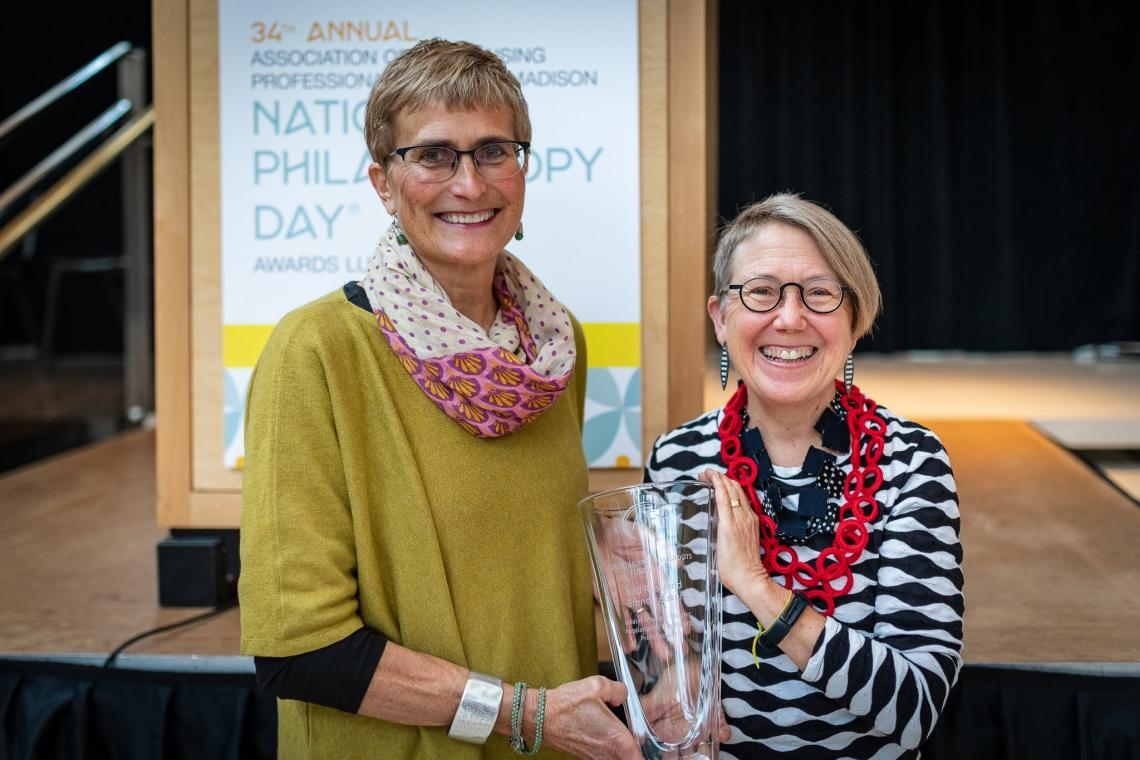 I had the absolute joy of sitting down and chatting with Bird Ross and Brenda Baker about their journey to their “Being Forward” social practice piece, which has blossomed into something more (see below). This led to Brenda and Bird receiving the Outstanding Grassroots Fundraisers Award at last fall’s National Philanthropy Day, hosted by AFP Greater Madison! The two reflected on their earliest memories of philanthropy and how it has shaped their lives and their amazing work today.

Read and watch a short video about Brenda and Bird’s “Women Artists Forward Fund (WAFF)” and how it is helping women artists in the Dane County community. The WAFF ranks among the top three funds for women artists in the entire nation in terms of dollars awarded annually. This includes two unrestricted, annual awards for $10,000 each. Brenda Baker and Bird Ross short bios

How did you two meet each other and how long ago?

Bird: I think I met you in your studio, Brenda! Thirty years ago.

Brenda: It was a long time ago! [At UW] in the Art Department.

What are some of your earliest memories involving philanthropy?

Bird: I love that question, because I’ve never even thought about it before. I would say that my first experience with philanthropy was selling Girl Scout cookies. Selling Girl Scout cookies was great fun! You took a big box of cookies and went door to door. You met your neighbor and talked to them about what you were doing and why you were doing it. To have an enthusiasm and connection to something, and to make it bigger than yourself - bigger than any one person can do. I have never really thought so much about Girl Scout cookies before! But I think it really was a good foundation.

I looked up “philanthropy,” because you think about philanthropists and think, “oh, those are people that give money” or “those are people who give time.” Philanthropy is the desire to promote the welfare of others. And I thought, “Bingo!” That’s really what we were after. I think that that’s what drove everything I’ve done that was “philanthropic.”

Brenda: I was also a Girl Scout and had a similar experience, but I think for me it started even earlier, with a little orange box and going around on Halloween to Trick-or-Treat for UNICEF. I remember being so taken that I could have a part in helping someone in another place. Someone that I didn’t know, and who didn’t have enough food or money or clothing, and that I had the power to help facilitate change. I thought that was really important and powerful. I don’t know how many things like that exist anymore. I haven’t seen a UNICEF box around Halloween in years! When I went to college, I struggled to pay for college. I ended up getting a really important scholarship. I got an award when I graduated college to go to graduate school in art. It wasn’t a lot of money, but it really pushed me and made me feel like I could make the next step. I remember thinking “If I’m ever in a position to do this for someone else, I’m going to do it.” Because it was such a gift. To think that somebody who I didn’t know was helping me was really powerful.

How was your WAFF project impacted by the pandemic?

Brenda: Our project was called “Being Forward.” The whole idea was photographing women artists and philanthropists, and every time we photograph them we’ll have a conversation about philanthropy and we’ll ask them for money to support women artists going forward.

We would not have done the project without the amazing advisors who helped us along the way.

Because we weren’t professional philanthropists, that was actually a feather in our cap. People knew we weren’t doing this for ourselves, but that it was a passion. We weren’t getting paid to do it, it was volunteer, so I think there was a sincerity and a passion that helped us.

Bird: And we had such great supporters!

Brenda: It started in 2017, so it started before the pandemic. But our work shifted. We started out wanting to raise funds to support women artists, so the first several years were really heavy fundraising. We still have some fundraising to do, but now we’re actually giving money away. The fact that we were able to give money away during the pandemic and reach out to people felt really wonderful.

Bird: When we were in the middle of the pandemic, we could only recognize the winners with checks in a park during a snowstorm with flowers. But still, we were doing something and it was making a difference! We have been learning by the seat of our pants since day one, and we continue to learn by the seat of our pants. It is a great way to learn, because you can’t have any fear!

How has your work life and career path been defined by and shaped by your internal compass?

Brenda: I feel like I have always had an internal compass that has guided me really strongly to follow my beliefs and follow my passion. I feel really grateful that I have been able to be an artist and use my talents in a way that also brings in a little bit of money. I have been guided by my internal compass. In terms of how philanthropy feeds into that, I feel like being an artist and using those talents at the Children’s Museum serves a higher purpose. I feel lucky that I have been able to pursue my passions.

Bird: It’s an interesting question because I feel like Brenda and I didn’t come at this as philanthropists - we came at this because we saw a need. And we saw what we were doing already as artists could drive the raising of funds to support others. I don’t think there was anything from our own pasts that didn’t feed what we decided we were going to do.